You are here: Home / Knowledge / International / Are Peaks in Legionnaires’ Disease Linked to Increased Rainfall?

Are Peaks in Legionnaires’ Disease Linked to Increased Rainfall? 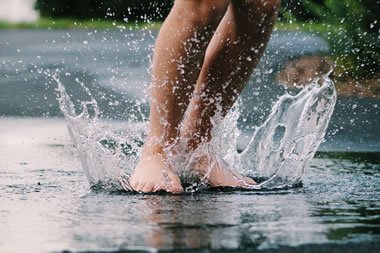 In this article our legionella experts look at research around climate change and whether increased rainfall is linked to peaks in cases of Legionnaires’ disease around the World.

The article looks at research carried out by the World Health Organization and scientists in Japan, and considers the effects of climate change and increased rainfall on the potential for greater growth rates of Legionella bacteria both in manmade water systems and the natural environment.

Legionnaires’ disease got its name from an outbreak of a serious form of pneumonia at an American Legion convention in Philadelphia, USA in 1976. Today, this disease and others such as Pontiac fever caused by the same bacterium are covered by the same umbrella term of Legionellosis.

The World Health Organisation (WHO) has written about how Legionella bacteria may potentially respond to changes in the weather. This research also highlighted the possibility that climate change may bring about more favourable conditions for the bacteria to multiply in.

Outbreaks of Legionnaires’ disease are not necessarily associated with heavy rainfall, but there does seem to be a connection between periods of rain and a rise in the number of reported cases of illness caused by Legionella bacteria.

Legionnaires’ disease has been shown to have an incubation period of between two and 10 days. This means symptoms will begin to appear at least two days and up to 10 days following exposure to and inhalation of the Legionella bacteria, depending on the individual.

One study showed that infected patients had been in areas where rain had fallen around six to 10 days prior to their illness developing. This fits perfectly with the incubation period mentioned above.

Meanwhile, researchers in Japan took samples of rainwater from roads finished with asphalt to see whether legionella was present. They found it was, especially in cases where temperatures were warm when rainfall occurred.

We know the ideal temperature range for the spread of Legionella bacteria is between 20-45 degrees Celsius. It is unknown whether asphalt roads have any bearing on the results of the study. However, it is easy to see how rainfall during warm periods could potentially lead to a proliferation of Legionella bacteria under ideal conditions.

Legionella bacteria is known to flourish between 20-45 degrees Celsius

Consider the spray sent up by vehicles driving in such conditions and it is easy to see how pedestrians, cyclists, and other unprotected road and pavement users might be exposed to the bacteria.

While Legionella bacteria can thrive under certain conditions in manmade water systems, the bacteria are also found in various natural environments such as ponds and other similar water sources such as rivers.

It would make sense, then, that warmer temperatures would raise the possibility of an increase in Legionella bacteria in the world around us.

Could warmer temperatures increase  the growth of Legionella bacteria in the world around us?

We may be able to take steps to manage the risks associated with manmade water supplies, but we may not be able to do the same regarding the natural environment.

Could this be a possible source of some outbreaks of Legionnaires’ disease in the past, where another source of the disease has not been identified? The WHO bulletin suggests this may potentially be the case.

Does climate change have a role to play as well?

The same bulletin issued by the World Health Organisation also covered the possibility that climate change may lead to more favourable temperatures for the bacteria to multiply in.

While pneumonia caused by legionella occurs in only 2-15% of cases, it has been noted that the cases tend to peak during the summer and autumn months. These are the warmer months of the year, suggesting that the temperature range is ideal for the bacteria to multiply at that time.

Global temperatures are rising – good news for legionella, not so good for us humans!

Climate change has been noted since the end of the 20th century. It is also referred to as global warming, since the average temperature noted around the globe gradually rises. While this occurs very slowly, even the smallest rise in temperature has effects seen around the world.

Today’s average global temperature is around three-quarters of a degree Celsius higher than it was 150 years ago. This highlights that warmer temperatures could help Legionella bacteria multiply and spread more readily than before.