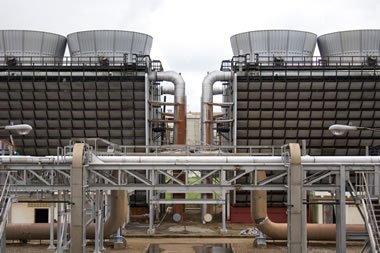 How many times have you read about an outbreak of Legionnaires’ disease and later learned that a cooling tower was found to be responsible?

While cooling towers aren’t always the root cause, of course, but oftentimes these towers have had a significant role to play in such outbreaks.

But why is this? … What is it about cooling towers that makes them a potential hotspot for Legionella bacteria to grow to potentially harmful levels?

To understand this, we should first learn what a cooling tower is and how it is used.

What is a cooling tower?

Put simply, a cooling tower is designed to remove heat from water, hence the name.

Waste heat that is generated from buildings or production processes is extracted by a local cooling system.

That heat is then transported and finally ejected into the atmosphere once it has been cooled by the tower.

The cooling process is achieved by mixing air and the heated water to lower the temperature of that water.

Think of it as a huge fan inside the tower, working hard to cool the water and causing evaporation as it does so.

How is this relevant to the spread of Legionella bacteria?

It loves to grow in water that is at just the right temperature… between 20 and 45 degrees Celsius.

Anything above or below this temperature range won’t cause the bacteria to multiply.

Since a cooling tower deals with changing temperatures, there is an increased risk of the bacteria taking hold if not treated properly.

If you know how Legionnaires’ disease is caused, you will also recognise the risks of contracting it from a cooling tower that has not been properly maintained.

Legionella bacteria must first be inhaled for it to cause harm, since it is associated with several lung conditions of varying severity.

These conditions range from the relatively mild Pontiac fever to the potentially deadly Legionnaires’ disease.

Since a cooling tower emits evaporated water into the atmosphere, it can potentially create a scenario where legionella contaminated water droplets are sent into the air and carried far and wide on the wind.

These contaminated droplets can then be inhaled not just by those immediately near the cooling tower, but by anyone who is in the vicinity.

It is this spread of water droplets that could contain Legionella bacteria that is most concerning.

If a cooling tower is not properly tested, cleaned and maintained on a regular basis, it can easily become a real danger to people across a wide area.

Perhaps one of the most famous (or infamous) outbreaks of Legionnaires’ disease in recent times occurred at the Disneyland park in Los Angeles USA in 2017.

A series of Legionnaires’ disease diagnoses were made by authorities towards the end of that year.

It was discovered those affected had either spent time in the immediate area surrounding the park in Anaheim or had visited the park.

All those affected were aged 52 or older.

One death occurred in someone who already had other health problems before contracting the disease.

Following the investigations Legionella bacteria was found inside two of the cooling towers at the Disneyland theme park, both were subsequently shut down.

While the towers were not in a publicly accessible area of the park, the nature of the cooling towers meant that some who had visited the park had fallen ill and were diagnosed with the Legionnaires’.

There have been many other Legionnaires’ outbreaks related to cooling towers across the world, including:

Many other cases have also occurred since.

Cooling towers can often be at the heart of major outbreaks because they have the potential to spread contaminated water vapour over large areas.

This means not only those with direct contact with the water systems are affected, but anyone who happens to be nearby when the water droplets blow in their direction.

Which properties and businesses have cooling towers?

Cooling towers can be found in many locations around the world.

Hospitals, hotels and offices use them… theme parks use them, as we have seen.

Many large businesses, power plants and factories also use them.

It is recognised that these towers can easily provide the perfect conditions for legionella and other bacteria to grow and multiply very quickly.

It is estimated by some experts that the bacteria are found in at least 60% of all cooling towers, and possibly as many as 80% of them.

If these towers are properly maintained, however, the levels of bacteria present can be controlled to remain below critical levels.

Focusing on prevention and good water treatment practices is key to minimising the chance of any outbreaks of Legionnaires’ disease.

Regular testing and cleaning should be done, along with proper treatment to ensure bacteria is not given the chance to grow.

Replacing defective and old or damaged tower parts also minimises the chance of biofilm forming on those components and using rust, organic matter and similar nutrients to grow to dangerous levels.

It is possible to hire a specialist company to undertake all your testing, maintenance and cleaning requirements for cooling towers and this is highly recommended.

In the end, this is probably the best preventative step anyone could take to prevent their cooling towers form causing an outbreak of Legionnaires’ disease.

Our teams of legionella and water safety specialists support those responsible for the control of legionella in cooling towers and other water systems, helping them to protect people and meet their health and safety obligations in this specialist area.