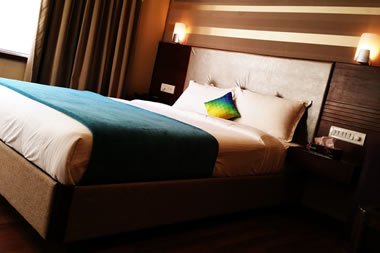 Atlanta, USA – This summer Atlanta’s Sheraton hotel was the location of an outbreak of Legionnaires’ disease, and the hotel has only just reopened to the public after a closure of several weeks. The outbreak of illness affected people who stayed at the hotel between mid-June and mid-July 2019, when the hotel was forced to close.

One person died in the outbreak, a further 12 cases were confirmed after laboratory tests, and another 63 cases were classed as probably Legionella. So what lessons can be learned from what happened in Atlanta?

Legionella found in the hotels cooling towers and decorative fountain

Georgia state health officials suspect that the outbreak of Legionnaires’ originated in either a cooling tower, or from a decorative fountain in the hotel’s lobby area. After extensive testing, the authorities confirmed that Legionella bacteria had been found in both locations. The hotel’s whole water system has been treated to kill off any remaining bacteria.

Assessing the commercial consequences of an outbreak of Legionnaires’

Such an outbreak results in far reaching consequences. Notwithstanding the tragic loss of life and serious ill health caused, there are other consequences that affect all sides of the issue. The damage to the hotel’s reputation is not the only problem facing the owners of the Sheraton. The four-week closure while the water systems were treated will have a serious effect on the hotel’s profit. The costs for resolving the problems in the water system are high, and the huge amount of press coverage on the issue may have an ongoing impact on the hotel’s future profitability.

Lawsuits already filed against the hotel owners and others involved

The Sheraton hotel’s management may also face legal action over their actions before and during the Legionella outbreak. A firm of lawyers, acting on behalf of 40 people who fell ill after a stay at the hotel, have already filed a lawsuit. The lawyers are demanding that their clients be compensated by past, present and future suffering and loss of wages and expenses incurred by the victims.

The parties named in this lawsuit aren’t just the hotel’s owners, the Arden Group. The hotel’s general manager, Mr Ken Peduzzi, and contractor companies responsible for water system maintenance have also been named. These individuals are accused of negligence, and that they fell far short of what is expected in terms of taking necessary precautions. The lawsuit also alleges that the named members of staff didn’t take the safety of guests seriously, and failed to act when they became aware of the risks associated with the water system in the hotel.

The Atlanta Sheraton case brings home the critical importance of keeping on top of issues around water safety and in particular, the control of legionella. If you take your eye off the ball, the consequences can be devastating for not only your business, but for human health too. Water systems should be regularly maintained, inspected and tested to make sure they are working properly.

American authorities state that 90% of the country’s Legionella outbreaks could be prevented with more robust water systems management, and there is no reason to think the situation in the UK is any different.

The importance of proactive legionella management

Taking a preventative approach to Legionella management is always better than trying to solve an established problem. A good monitoring and control system can help avoid future outbreaks. Any control plan should look at controlling the temperature of the water itself and the level of biocides, making sure bacteria are kept within safe limits. Regular water testing should reassure you that your regime is working effectively. Don’t take risks with your own, staff and customers’ health. Know your responsibilities under the law and make sure you are compliant with all aspects of Health and Safety legislation.

Our teams of legionella and water safety specialists support those responsible for the control of waterborne pathogens including Legionella bacteria in the workplace, helping them to protect people and meet their health and safety obligations in this specialist area.

What to Do if Legionella is Detected

Things You Should Know About Legionnaires’ Disease
Scroll to top