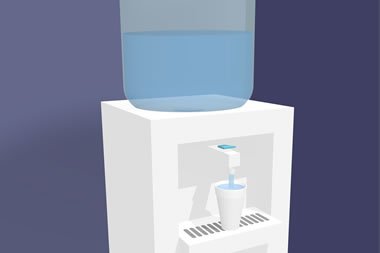 Scotland’s NHS recently announced that they are to remove all water coolers in hospitals as they attempt to minimise the risk of infection. In the middle of August this year, staff in Glasgow hospitals were told to stop using the bottled water coolers and switch to drinking tap water instead.

NHS Greater Glasgow and Clyde, covering a population of over a million in the west of Scotland, was the first health board to adopt the new infection control protocols. The new guidelines, issued centrally from NHS Scotland, stipulate that water coolers using bottled water should not be used in any NHS Scotland centre.

After NHS Scotland announced the ban on coolers, the shadow Heath Minister Miles Briggs MSP (Conservative) demanded answers from ministers in parliament. Briggs demanded to know what was being done to protect staff and patients across Scotland’s hospital network and how the situation had arisen in the first place.

The ban has been put in place due to the risk of bacteria such as Pseudomonas and Legionella growing in the water bottle itself and the dispensing nozzle, especially in coolers which are not used on a regular basis. This risk is elevated in older patients, and those with underlying medical conditions. It is expected that Scotland’s other health boards will follow Greater Glasgow and Clyde’s lead in the weeks to come.

Issues with water supply are not a new problem for Scotland’s NHS. An investigation is underway at the flagship Queen Elizabeth University Hospital (QEUH) in Glasgow after a number of patients contracted infections which were subsequently linked to the hospital water supply. The investigation has uncovered contamination in many of the hospital’s drains and taps.

The Royal Hospital for Children, immediately adjacent to the QEUH, suffered an outbreak of infection in two of the paediatric cancer wards in 2018. As part of the measures to tackle that infection outbreak, the NHS put in a new system for treating water, and provided bottled water to staff and patients. Despite these measures, the level of infections has continued to rise.

NHS National Services Scotland, which provides detailed advice to the Scottish Government on all matters concerning public health confirmed it would be publishing detailed guidance for hospitals later in 2019. However, the process of removing water coolers using bottled water is already underway. Water coolers are a standard feature of many hospitals, and are used by patients, staff and visitors.

Shadow health minister Miles Briggs highlighted the concern that something as basic as safe drinking water appeared to be causing such a high level of difficultly for health boards. He also reiterated that the provision safe drinking water should be fundamental for all hospitals. He also said that some patients had been asking relatives to bring in bottled water instead, but that this practice could also cause infection control difficulties.

A Union spokesperson, Matt McLaughlin of Unison, stated that the NHS had a duty to provide safe, clean drinking water to staff, and that many workers in Scottish hospitals were unsure whether water from taps was safe to drink or not.

Given the complex design of many hospital buildings and their water systems, not every cold tap is directly drawn from the mains supply. Mr McLaughlin called on the NHS to clearly identify for staff and patients which taps provided water straight from the mains supply, and safe to drink.

A NHS spokesperson confirmed that they were reviewing all advice and guidelines about drinking water and units which dispense water, and that these would be published in a document later this year. They also said that at present, there was no formal ban on water coolers and similar dispensing equipment which applies across Scotland.

Our teams of hospital and healthcare water safety specialists support those responsible for the control of waterborne pathogens including Legionella bacteria in the workplace, helping them to protect people and meet their health and safety obligations in this specialist area.

Are Peaks in Legionnaires’ Disease Linked to Increased Rainfall?

What to Do if Legionella is Detected
Scroll to top